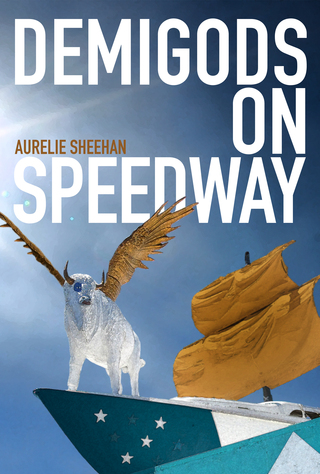 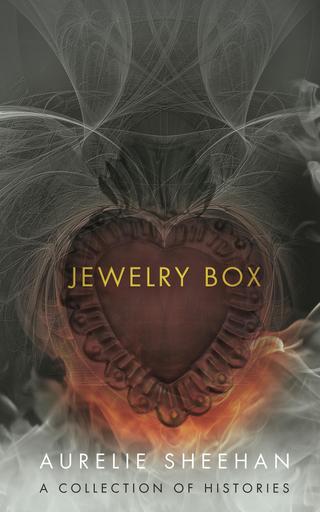 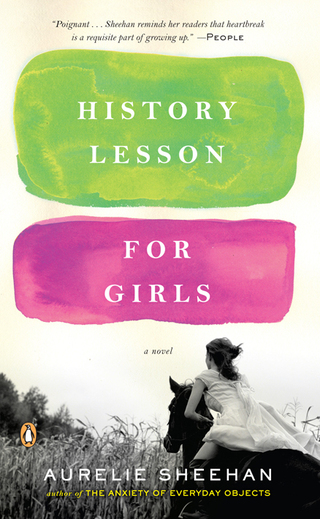 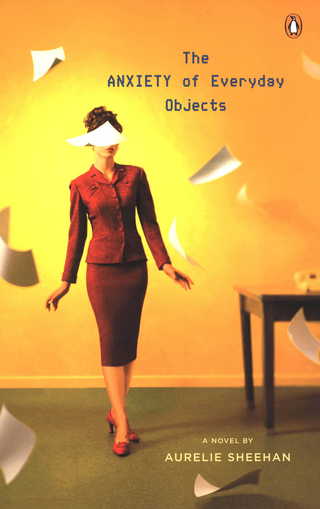 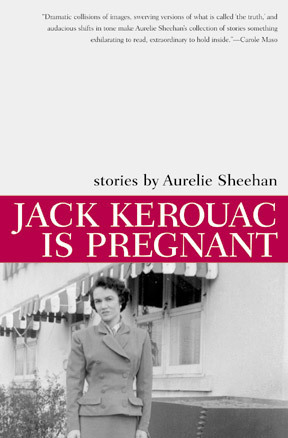 Once into the Night

"Aurelie Sheehan must have gotten her poetic prose license at an elusive shop of glittering perceptions. Her enchantingly quirky, surprise-a-millisecond chapters are fabulous—I wished to go Two, Three, Many more times into the Night, but, alas, these original micro-stories of fables, foibles, and family ended quickly. Please pick them up where I left off, wishing to read them again. How did she do it? Aurelie Sheehan made Oscar Wilde wake Calvino with a start and a glass of bubbly—not in her book, but no kidding, Once into the Night propelled me with its witty, associative voice into a cosmos of magic and memory that I haven't experienced since those guys woke me with a start and a glass of . . ."

—Jane Miller, author of Who Is Trixie the Trasher? and Other Questions

"Aurelie Sheehan writes eerie legends, intimate stories, and beguiling personal confessions that chase after the bottomless mystery inside our everyday lives. These are fictions stamped with truth, or they are true accounts suffused with the clear magic of fiction, crafted by a writer who is a gifted and lyrical seer, shrewdly attuned to what is most worth calling out from our complicated and contested reality."

—Ben Marcus, author of Notes from the Fog

"With a casual and wounding intelligence presiding over every story, Once into the Night feels like a seance of emotions that you're sometimes embarrassed to be feeling, sometimes can't wait to feel again, and sometimes feel relieved to know that you can."

—John D'Agata, author of About a Mountain

“Aurelie Sheehan’s demigods, like their ancient counterparts, are tragic and comic and utterly, movingly human. And Tucson, her 21st century Olympus, in all its sizzle and steaminess, comes gorgeously to life. I couldn’t put this book down and I didn’t want it to end. So I read it again and loved it even more.”

“In Demigods on Speedway, Aurelie Sheehan brings the Greek gods back to Earth and to the City of Tucson. Her large and attractive cast of characters fill the long shifts of light and stars with longing, hope, self-regard and the desire for beauty. This is a Tucson lit by the divine's fatal, exhilarating glamour.”

“Aurelie Sheehan is a master of illusion, but she's not dealing in magic - she's describing and defining the illusions of identity we conjure up daily in the 21st century. She's a great portraitist, with a sharp eye for the absurdities of modern day habits. In the seedy, sordid dustiness of a desert town, these characters wrangle with their tender ambitions, lining up their ideals with their realities. For all their bad habits and dead ends, these characters are endearing - they're open to love, to surprise, to stark realizations. And all along, Sheehan's writing is sensuous, sensory, bringing these worlds, our world, to vivid life.”

“This is a work of serious literary fiction that illustrates issues and lifestyles of people in contemporary Tucson . . . it’s original, dramatically and poetically moving.”

“With prose that is vivid, sly, and original, and in stories that are smart and thought-provoking, Sheehan has written a collection that would be a great addition to any fiction list.”

Jewelry Box: A Collection of Histories

"Aurelie Sheehan's absorbing stories have depth miles beneath their compelling surface. They radiate a wisdom, beauty and originality rare in contemporary fiction."

"Aurelie Sheehan writes, with porcelain precision, stories tuned like poems that behave like memoir. Jewelry Box traces the spider-webbing tensions between life's sweetness and the need for strife."

"Aurelie Sheehan’s sterling collection, Jewelry Box, is mint. These splinters of story, shaved from massive glaciers of narrative, fracture like ice shards calving from a flow, like crimped reeding sliced from a ducat. These silver slivers work their way under the skin to worry there—lodged, seated, touched. Tangible, gingerly gingered treasures, each one. And each one, edged and embossed, authentic coin of the submerged and still untarnished realm.

“The language is supercharged, as brilliant as rare metals mined from base earth. It takes on a lyrical chare in places, becomes songlike and poetic in others, and can still manage the blunt directness and brevity of the everyday, of the real, of the unembroidered.”

“Sometimes dream-like, autobiographical, or poetic, the book resists mere categorization in favor of assembling a vivid collection of instances imbued with nostalgia and import.”

“There are 58 delightful, tiny stories in this collection’s 108 pages, though the book is subtitled ‘A Collection of Histories.’…Microfictions, flash-memoirs, prose poems, incidents, anecdote, extended metaphors—there’s no differentiation on the book’s part, nor is there much need, as most of the pieces are glittering little truths whether factual or not….Sheehan writes like a fucking maniac, by any lapidary measure.”

--Inside Higher Ed [The Education of Oronte Churm]

“Sheehan’s histories focus on moments, on objects, on fragments. We, the readers, do the rest, carrying through our days Sheehan’s embodiments of familiar things, letting our own minds and experiences fill in her ellipses. Each of Sheehan’s histories reminds me of what she writes about the tulip in ‘Glass’: ‘it…grew even after it was cut.’”

"An intelligent, original coming-of-age novel from the author of The Anxiety of Everyday Objects (2004) and Jack Kerouac Is Pregnant (1994)...her language remains carefully off-kilter, gorgeously specific and shot through with unobtrusive wit. Lyrical, assured, heartbreaking."

"In her second novel, Sheehan juxtaposes small moments the way an artist uses colors, creating potency and meaning with immediate contrasts...A tender, unflinching, and distinctive view of how girls grow up."

"This wistful, gentle novel has something surprisingly harsh to say about coming of age in a culture of self-indulgence and spiritual foolishness."

"The '70s witnessed a clash between bohemianism and the civil rights movement and the stalwart old guard, and no one describes it better than the young woman in Aurelie Sheehan's History Lesson for Girls."

"Sheehan catches with consummate skill those perilous moments when girls gallop into the unknown territory of womanhood."

"Poignant...Sheehan reminds her readers that heartbreak is a requisite part of growing up."

"Aurelie Sheehan's funny, nimble, bright-eyed prose is far more honest than the fiction we call Western Civ. Relentless and relatable, History Lesson for Girls is the truest novel that I've found in ages. Read it. Now. By flashlight. In the prone position. If not solely to remember the place that you and I come from--the year before doubt, before sex, before adult injustice, all the raw deals we'll never understand and never really escape."

--Koren Zailckas, author of Smashed: Story of a Drunken Girlhood

"Aurelie Sheehan perfectly captures the breath-catching intensity of those early friendships between young girls, when adults feel peripheral but aren't and everything hangs in the balance of large and small acts of love and betrayal. Beautifully written, History Lesson for Girls has a wonderful memory for the details of an era many of us will never forget.

--Cammie McGovern, author of Eye Contact and The Art of Seeing

The Anxiety of Everyday Objects

"'All good secretaries will eventually find truth in the hearts of men.' So begins Aurelie Sheehan's first novel. Not love, but truth. There's a difference, and in such subtle shadings lie the considerable pleasures of The Anxiety of Everyday Objects, a book distinguished from its peers -- as its hero Winona Bartlett is distinguished from hers -- by a fragile but persistent joy."

"Sheehan is an exquisite writer."

“Deliciously wacky debut novel...hilarious, sly, sharply observed, and one of a kind--more please.”

"An honest, revelatory exploration of work, art, and identity."

"[A] hilarious and occasionally touching tale."

"The everyday is the exceptional in Aurelie Sheehan's The Anxiety of Everyday Objects, a bright, breezy, absorbing debut novel dappled with humor."

“Each paragraph is cinematic in its intensity, conveying angle by angle an uneasy tale of sexual liberties and repression.”

“With their surprising turns of phrase and conversational intimacy, these stories of women coping with society’s expectations of them invite the reader to enter into a perceptual conspiracy with their narrators. Take a ride with Sheehan, and you will look differently at the world.”

“Aurelie Sheehan renders a powerful female sexuality; the prose rushes forward, full of heat and instinct...Sheehan should be read and re-read.”

“Dramatic collisions of images, swerving versions of what is called ‘the truth,’ and audacious shifts in tone make Aurelie Sheehan’s debut collection of stories something exhilarating to read, extraordinary to hold inside.”

“Jack Kerouac Is Pregnant is a marvelous introduction to Aurelie Sheehan’s musical, muscular prose. She writes about the explosive warfare between women and men with heartbreak and naughty delight.”

Once into the Night
57 stories + truth + lies +
Demigods on Speedway
Contemporary stories with a mythological bent.
Jewelry Box: A Collection of Histories
Very short stories with a sense of self
History Lesson for Girls
"Lyrical, assured, heartbreaking."
--Kirkus Reviews (starred review)
The Anxiety of Everyday Objects
“Deliciously wacky debut novel... Hilarious, sly, sharply observed, and one of a kind.”
--Kirkus Reviews (starred review)
Jack Kerouac Is Pregnant: Stories
“Take a ride with Sheehan, and you will look differently at the world.”
--The Washington Post

Common Reader Interview with John Griswold on Once into the Night
Guernica--"The Suit" from Once into the Night
Lit Hub--"Wolf in the Basement" from Once into the Night
VQR -- Feminist Forms: Leaving Realism Behind in New Fiction by Women by John Domini
Cagibi--"Oscar Wilde & My Brother" and "Nudity" from Once into the Night
On the Seawall--"Winter" and "Forgetting" from Once into the Night
"High in High School by Madam X," March Shredness 2018
"Ten Body Stories," Conjunctions 69: Being Bodies 2017
"Map of Arizona," Territory: Arizona Atlas 2016
"My City (or, On the Idea of Making It My Own)" Glimmer Train Bulletin
"Aurelie Sheehan Sneaks Up on Plot" - The Story Prize Blog 2014
"The Three Graces" - The Southern Review 2014 (audio)
Speaking of Marvels Novella Interview: <i>This Blue</i>
Ploughshares Solos: This Blue
Terrain.org: Three Histories 2014
"On Changing My Mind: Occassional Essays by Zadie Smith" - Essay Daily 2013
Inside Higher Ed: The Education of Oronte Churm Book Review of Jewelry Box 2013
Willow Springs Notes on Short Fiction and Jewelry Box 2013
"Aurelie Sheehan Comes out of Hiding" - The Story Prize Blog 2013
"Recognition" Guernica 2012
"Sweet Home Arizona" - The New York Times 2011
"Pain" Guernica 2009
"Bambi's Mother" Five Chapters 2007
"Big Truck" Guernica 2006
"Wedding Party" Smyles &amp; Fish 2006
"Pill" and "Bathroom" Spork 2006
A selection of histories from Spork 2004
History Lesson for Girls Reader's Guide
The Anxiety of Everyday Objects Reader's Guide
Jessica Lee Jernigan interview with Aurelie
Aurelie Sheehan on Lydia Davis
Trident Media Group
E-mail the Author
Loading…}